King Shaka International Airport (FALE) was conceptualized in the 1960’s when it was realized that the old Louis Botha/Durban International airport (FADN), to the south of Durban, would soon reach its capacity.

Construction began in 1973 and by 1975 the earthworks and a storm drainage system to the value of R320 million were completed. By 1982, the project was halted due to the economic slowdown. A local Micro light club made use of the grassed over runway. The new airport was named La Mercy Airport (FALE) after the town of La Mercy located five kilometers east of the airport.

Construction at the airport site recommenced on the 24 August 2007 and the airport was opened on the 1st of May 2010. King Shaka International Airport (FALE) is located 35 kilometers (22 miles) from the City of Durban.

If you previously purchased NMG King Shaka Intl Airport V2.4 (FSX) at NMG Simulations, you are entitled to a discounted upgrade price.

NOTE: The special upgrade price will be awarded automatically, therefore you must be logged into your same account used to purchase the previous version! If in doubt contact NMG Simulations support first! NO REFUNDS GIVEN!

You may request us to transfer your orders from one of our resellers by using the link below.

REQUEST TRANSFER OF ORDERS FROM A RESELLER 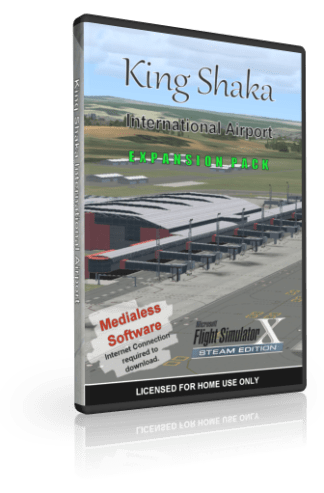 You're viewing: NMG King Shaka Intl Airport / Durban V3.0 (FSX) R250.00
Add to basket
This website uses cookies to improve your experience. We'll assume you're ok with this, but you can opt-out if you wish. ACCEPT REJECT READ MORE
Privacy & Cookies Policy