During the 1930’s, the City Council of Pretoria decided to build a landing strip on the farm Wonderboom, approximately 15 km (9.3 mi) north of Pretoria. This was the beginning of Wonderboom Airport (FAWB) and the landing strip was open for air traffic in 1937. Over the years, the airports has been extensively upgraded and the runway lengthened to handle bigger aircraft. More upgrades are planned for the future including scheduled passenger services to and from the airport.

This airport package has been created with as much detail as it was possible without making it impossible to fly in and out of. This airport is so true to life, it is almost like being there! For those who have been to Wonderboom airport before, will immediately recognize the airport layout. Everything is where it is supposed to be from the buildings to the sign boards; even the advertising boards scattered around the land side of the airport!

The Africa Terrain Mesh is a highly recommended must have package for this airport. Without this package or a similar terrain mesh package installed, the Megallies Berg and the hills around the airport will not be visible as the resolution of the default terrain mesh included with Microsoft Flight Simulator X (Standard/Gold/Steam Edition) is too low to show this type of terrain detail. 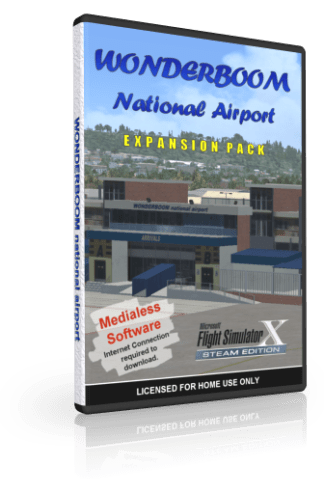 You're viewing: NMG Wonderboom Airport V1.3 (XP10) R175.00
Add to basket
We use cookies to ensure that we give you the best experience on our website. If you continue to use this site we will assume that you are happy with it.OkPrivacy policy