Bram Fischer International Airport was constructed in 1912 and it was South Africa’s third largest airport at the time. The runways where upgraded in 2002, followed by an upgrade to the terminal shortly thereafter.

Bram Fischer International Airport is located 10 kilometers (6 mi) from the city of Bloemfontein which is also the capital city of the Free State Province. The airport shares runways with Air Force Base Bloemspruit which is located at the east side of the airport.

This package contains Bram Fischer International Airport, New Tempe Airport and the City of Bloemfontein with all the prominent buildings and landmarks. 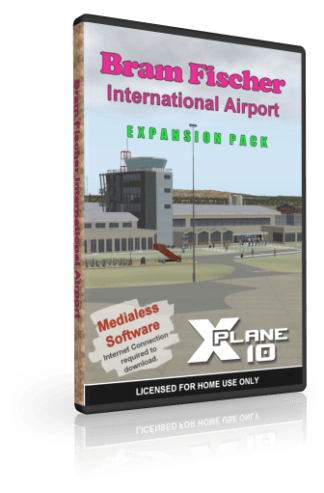 You're viewing: NMG Bram Fischer Intl Airport / Bloemfontein V1.3 (XP10) R175.00
Add to basket
We use cookies to ensure that we give you the best experience on our website. If you continue to use this site we will assume that you are happy with it.OkPrivacy policy